I’ve been a practicing psychiatrist for over 35 years, with special training in neuroscience and integrative medicine.  In the last year, I began offering IV Ketamine infusions paired with psychotherapy.  The results have excited my patients and exceeded my expectations.  Some have exhibited nearly immediate transformation, while others have had a more gradual ascent from the depths of trauma and depression.  Every one who does the work, gains the benefits both short and longer term.  I don’t say this lightly – for the right patient, it’s the only treatment path I’ve seen with this measure of success.

So – what about the popular Spravato, the nasal spray we’ve seen touted on social media and blogs? Isn’t that an easier solution? In a word: No.

Some research, particularly that performed by Dr. John Krystal, has shown that Esketamine, known as Spravato, has been effective in symptoms of depression.  Think about this: “effective in symptoms of depression”, versus actually alleviating the root causes of the depression itself.  I’m an uncommon physician, in that I’m less impressed with symptom relief and more focused on finding and treating the causes.  Not surprising, but that why patients choose my care.  As a sidenote, Dr. Krystal helped develop Spravato because ketamine has come off patent (and therefor, is inexpensive). Spravato is very expensive, and he is co-owner of the patent. 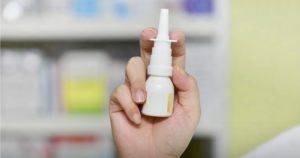 New research from the National Institute of Mental Health in the U.S., and from Queens University in Ontario have concluded that Esketamine (Spravato) does not provide the benefits of Racemic (IV) Ketamine.  Published in the January 2021 issue of the Journal of Affective Disorders, this article is “the first systematic review and meta-analysis that has compared the performance of IV ketamine to intranasal Esketamine for the treatment of unipolar and bipolar depression”.   Read the study, led by Dr. Anees Bahji, here: https://doi.org/10.1016/j.jad.2020.09.071

While both forms of Ketamine may induce an immediate euphoria or dissociation, the true benefit lies beyond its immediate effects. IV Ketamine initiates a cascade of events resulting in a rapid response, but when combined with psychotherapy, this benefit is sustained long after the drug has been metabolized.  I have seen that IV ketamine continues its work as long as patients continue to do their own work, initiated by ketamine assisted psychotherapy, long after treatment with ketamine has stopped.  This indicates that IV ketamine has direct effects on synaptogenesis and neural plasticity. In other words, it helps brain cells to grow new connections long after administration of the drug itself.

I have yet to find a single published case in the literature that suggests that using Spravato has the same long-term impact or effect. I believe what we are seeing is that Spravato can produce something of a “euphoria“ which many users have described as a “high”, but fails to produce the cascade of neurochemical events that can result in actual brain changes.

We’re not looking for short term symptom relief.  We’re looking for real solutions that liberate people suffering from depression and trauma.  When the patient, process and therapist come together with a shared goal and dedication,  there is now a real solution.  If you have questions, or think Ketamine Assisted Psychotherapy may be right for you, call Kim Erison, NP and talk with her.  We’re here for you.